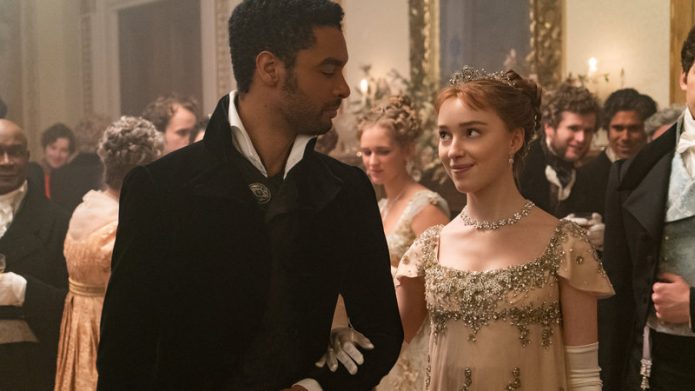 But let’s say a little more.

The eight-episode drama, which premiered on Netflix on Christmas Day, was created by Chris Van Dusen, who previously wrote for the Shonda Rhimes shows Scandal and Grey’s Anatomy. It’s also the first scripted product of Rhimes’ deal with Netflix from her production company, Shondaland. Bridgerton is an adaptation of mostly the first book in a successful series of eight Regency romance novels by Julia Quinn. Taking place in the early part of the 19th century, the books follow the eight siblings in the Bridgerton family, four boys and four girls, as they seek the loves of their lives.

This first season’s primary story is of Daphne (Phoebe Dynevor), the eldest Bridgerton daughter, as she enters the competitive marriage market. This involves a series of parties and dances where young women are introduced to young men, who later call on their favorites at home to be examined by their families for suitability. Daphne’s debut season gets off to a roaring start after she gains the favor of Queen Charlotte (Golda Rosheuvel), which makes her the object of much chatter. But after a couple of bumps that make her fear she’s losing her “value” on the market, Daphne comes up with a plan that involves the help of a hot duke named Simon (Regé-Jean Page) who doesn’t want to get married and needs a way to fend off the families who seek to foist their women on him. (Regency romance has a lot of hot dukes. They are to these books what elves are to … books that have elves.)

To try to explain what’s happening with all the Bridgertons would take pages, because although Daphne and Simon are the focus, several other siblings have B plots going on, including Anthony (Jonathan Bailey), who is dating an opera singer from the wrong side of the carriage tracks; Eloise (Claudia Jessie), who could not be less interested in following Daphne to marriage next year; and Benedict (Luke Thompson), who likes to paint.

But wait! There is an entire other family, too. They are called the Featheringtons (of course they are), and their daughter Penelope (Nicola Coughlan, as delightful here as in Derry Girls) is best pal to Colin Bridgerton (Luke Newton). She loves him from afar; he is a barely sentient lamppost about it, to the point where he has no idea how she feels, even when it’s very, very obvious. The Featheringtons have also taken in a young relative named Marina (Ruby Barker) who has a past of her own that is following her.

Is that all? OF COURSE NOT. All this is breathlessly reported to the entire town in an anonymous scandal sheet published by a writer who calls herself “Lady Whistledown.” Lady Whistledown! The Featheringtons! Let’s just lie down on the couch with some hot chocolate! (Sorry, got carried away there for a moment.)

Whistledown’s publications (think of them as Substack newsletters for the empire-waisted set) are an ingenious invention because they allow the plot to accelerate. What might take a long time to uncover in this world of “May I visit you for the next six months to earn the right to see your bare ankle in silhouette?” can be served up tout de suite when Whistledown, who somehow knows everything, drops all the hot gossip to everybody at the same time. She provides voice-overs too — and in whose melodious, majestic tones do we get to hear her dispatches?

JULIE ANDREWS. Julie Andrews, that is all.

Here, we need to step briefly into some mechanics-of-television talk. There’s a very common problem among streaming series, and perhaps especially Netflix series, where a season of 10 episodes feels like it should be eight, eight feels like it should be six, et cetera. Sometimes this is just general bloat that comes from a lack of motivation to cut anything. But there are a couple of other possible culprits. One is that a number of streaming series start out as feature film pitches, and then somebody has the brilliant idea to sell them to a streaming service as a series. This sometimes results in a somewhat ungainly process of just lengthening the piece and then cutting it into sections and making those sections the episodes. Another is that all across streaming and cable television, there’s a weird fondness for hiring established film writers to write television, and some of them … don’t know how.

Writing television requires writing to the rhythm of the episode, not just the season. An episode must have its own shape, its own rise and fall. (It’s one of many reasons “I think of this as an eight-hour movie” is often, though not always, a bad sign.) Obviously, in a serialized story, one episode will not be complete on its own when it comes to plot, but it should work on its own structurally. It should have a beginning, middle and end. That doesn’t always happen. Whole episodes are sometimes flat, because they’re in the flatter part of a season’s arc. Ideally, in a show like this, each episode should be both satisfying and tantalizing — you should exhale and say, “That was fun,” and you should also want the next one. I have wondered whether some of the tricksy kinds of episodes that are in vogue — the bottle episode, the episode focusing on the side character, the episode that’s out of the timeline — come about, whether they are good or bad, partly because they are ways to divide sections of the story other than learning to write to the rhythms of television.

Remember, binge-watching really came of age with DVDs, which didn’t have the Netflixian boosts of the auto-play and the credits-skipping and the part where they almost bodily shove you from one episode to the next episode. If you watched 10 episodes of Grey’s Anatomy on DVD, it was because you affirmatively said yes, over and over. Yes, I’m going to press the buttons and watch another one. Or, in fact, yes, I’m going to go to the trouble of tuning in next week. They had to earn your button-push; they had to convince you to do more than let it roll along.

Shondaland makes television and makes it well. There are eight episodes of Bridgerton, and they all have endings that are like chapters in a good book: They leave you in a spot where you just want to read one more chapter before you turn off the light for the night. The end of the season concludes several stories, teases several more and has a couple of delicious mic-drop moments.

It’s made with wit (several classical arrangements of pop songs are used in the score), with flair (the duke’s mother figure, Lady Danbury, marvelously played by Adjoa Andoh, has the most fabulous hats) and with an earthy kind of abandon. (There is … a lot of sex. If you are the kind of person who is uncomfortable watching enthusiastic sex scenes with members of your family, be forewarned about a holiday sit-down with this one. Let it be known I warned you about all the butts, if this causes problems with your household.)

In closing, Lady Whistledown has cleared me to share the following scandalous tale in case it is of use: This reviewer began watching Bridgerton at 4:30 on a Saturday afternoon and did not stop until she, normally an early-to-bed, early-to-rise type, finished it at 1 in the morning.