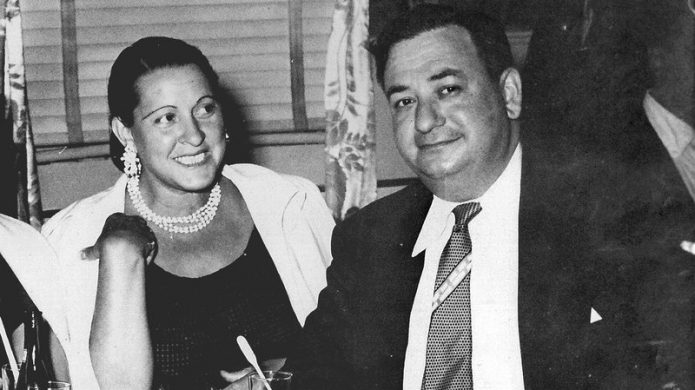 Hollywood portrayals of the American Mafia often focus on major cities, but writer Russell Shorto says there have been active mob organizations in countless small and midsize cities in the United States.

Shorto knows this firsthand: His grandfather was a mob boss in the industrial town of Johnstown, Pa. Shorto says his grandfather’s involvement with the Johnstown mob initially began as an offshoot of Prohibition, which opened doors for Italian Americans facing employment discrimination.

“When Prohibition happened, here was an opportunity,” Shorto says. “In this case, there was an old Italian guy in the neighborhood who seemed to have organized families to operate stills.”

When Prohibition ended, the Johnstown mob shifted its focus to gambling. It had a headquarters on Main Street, two doors down from City Hall, where it ran various operations, including card games, numbers games and sports betting.

“They had something like 100 people in their employ, most of them just sort of on the side, but some full-time bookies,” he says. “They made about $2 million a year over about a 20-year period.”

Shorto says his grandfather’s first arrest records were for running card and dice games out of the trunk of his car. He later rose through the ranks of the organization, eventually becoming its second in command.

Shorto writes about the Johnstown mob and the family havoc that resulted from his grandfather’s position in it in his new memoir, Smalltime. He says the family secrets he uncovered while writing the book were sometimes hard to stomach.

[The mob] paid people off. … Periodically [the police] would have to raid for form’s sake. And so [the police] would give [the mobsters] a call and let them know, “OK, we’re going to send a guy down to raid.” And so the idea was you would leave somebody behind, everybody would clear out and you’d take most of your betting slips, but you’d leave one guy behind, usually an older guy who was kind of down on his luck and didn’t have anything to lose by going and hanging out in jail for a day or two, and he would be there to take the fall and then they’d kind of reset and start again.

On how the mob organization had political influence

One of the differences, I think, between the small-town mob and New York or Chicago is that it was really focused on gambling. People told me this over and over, and I guess I have to believe them that they did not get into, for example, prostitution or drugs. Many people told me that, “Your grandfather and Joe, his brother-in-law, had this rule: Drugs, that’s dirty stuff. We don’t mess with that.” So I guess I have to believe them, regarding payoffs and things like that.

They were very much involved in local politics. They engineered to get a DA into office who they liked, and they were involved in unions. So that sort of thing was part of their world.

On his grandfather’s lifestyle, which was paid for by mob activity

On the surface, it was plain. They had a “no Cadillacs” rule. You couldn’t be showy. They didn’t wear tailored suits. But when you got out of town, that was a different story. And so when they were in Atlantic City, where they spent much of the summer every year with the whole family, they would bring a whole entourage of cars down to Atlantic City, and they rented a suite in the swankiest hotel and they had waiters for everything. They were often in Florida as well. So they lived it up when they were out of town. … But my grandfather was a very quiet guy. He mumbled a lot. Some people said they thought he was maybe pathologically shy. So he was good at putting up that kind of front.

On how his grandfather got beautiful clothes for his wife

He was a brilliant cheat at cards. And he would organize big card games. And my dad said he remembered as a kid watching him — he would practice for a couple of hours beforehand at the dining room table, dealing from the bottom of the deck and dealing the second card. And so he would get into these big games with the owners of the department stores and the jewelry store, and he would take them to the cleaners. And he would agree to take their winnings in merchandise. And so he would just tell his wife, “Go down to April’s, go down to Mark’s furniture store and get whatever you want.” And the manager would have to walk behind her and pile up all these dresses on his arm and that sort of thing.

Somehow I had grown up with this story that my grandfather, the forbidding figure, wanted his son to follow in his footsteps, and my father refused. And as a child, I think I saw this as valiant: “[My father is] doing this for us. He’s keeping his family protected.” As I talked to more and more of the old guys, I kind of repeated this, and they looked at me like, “What are you talking about?” And one of them said, “Are you kidding? Tony” — my dad — “wanted nothing more than to get into it.” So it turns out finally that I confronted my dad with this, and he admitted it and he said that, in fact, he had desperately wanted to get into it and he would hang out at City Cigar, the center of the operation. And if his father caught him there, he would beat the crap out of him. And so, in this strange way, my grandfather, this dark figure in my childhood, ends up being kind of this hero who’s trying to save his son from this life that he doesn’t want him to have.

Investigating your family history is part of growing up, basically. It’s moving yourself to another level of maturity, which is why I think everyone ought to do it — if they dare.

On his grandfather’s infidelity and children from those affairs

My grandfather … acted like a medieval king or something. He did what he wanted. This woman had his child, and she was actually the housekeeper who cleaned his house and his [business] partner’s house. And he decided eventually, “You’re not going to keep the baby.” His partner and his wife were unable to have children, [so] the two men decided they would announce that this was their child whom they had adopted, and that’s who raised the child. He had another child with another woman.

When I talk about me having this sense of darkness, which came from my awareness of how the older people in the family reacted to my grandfather, it’s not so much about the mob per se. It’s more about the fallout from his personality and his behavior. This kind of thing really kind of colored — and, I think, to this day … colors — a lot of people in the family.

On the intensity of doing family history research

I’m now kind of a great believer in family history in general. … Research your family, but do it if you have the stomach for it, because generally speaking, you know certain stories about your family. Once you start researching them, you’re going to find out that’s probably not true — or there’s a veneer of truth there, but the reality is something quite different. … Investigating your family history is part of growing up, basically. It’s moving yourself to another level of maturity, which is why I think everyone ought to do it — if they dare.

Sam Briger and Seth Kelley produced and edited the audio of this interview. Bridget Bentz, Molly Seavy-Nesper and Meghan Sullivan adapted it for the Web.