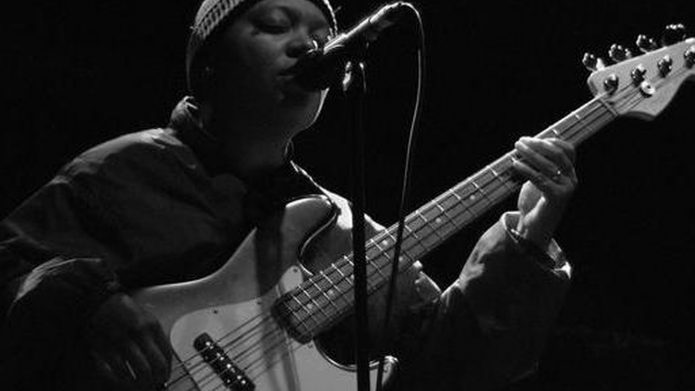 NPR Music’s Tiny Desk series will celebrate Black History Month by featuring four weeks of Tiny Desk (home) concerts and playlists by Black artists spanning different genres and generations each week. The lineup includes both emerging and established artists who will be performing a Tiny Desk concert for the first time. This celebration highlights the beautiful cornucopia of Black music and our special way of presenting it. We hope you enjoy.

Meshell Ndegeocello‘s Tiny Desk (home) concert feels like a narrative film. Shot in vivid black and white, the concert includes songs from throughout her career framed by her thoughts on the importance and influence of James Baldwin: “He deserves flowers every day. Most of all because he was willing to discuss things that were painful, hard to look at, hard to see, hard to accept.”

That description also applies to Ndegeocello’s inventive and challenging work on display here. She opens with “Step Into the Projects” from her 1993 debut album, Plantation Lullabies, transformed from its original funky groove into a stark spoken word piece. “Price of the Ticket,” with her longtime guitarist Chris Bruce, is from Ndegeocello’s recent project, Chapter & Verse: The Gospel of James Baldwin, “a 21st century ritual toolkit for justice” inspired by Baldwin’s The Fire Next Time.

She moves next from these songs about communal life to two that dig into internal turmoil. “Forget My Name” from Comet Come To Me (2014) is stripped down from its original reggae arrangement and lays bare the haunting imagery in the lyrics. “Fool of Me,” from her acclaimed album Bitter (1999), ends the set with just vocals and guitar. This is one of the most intimate, focused and intense Tiny Desk concerts you’ll find.