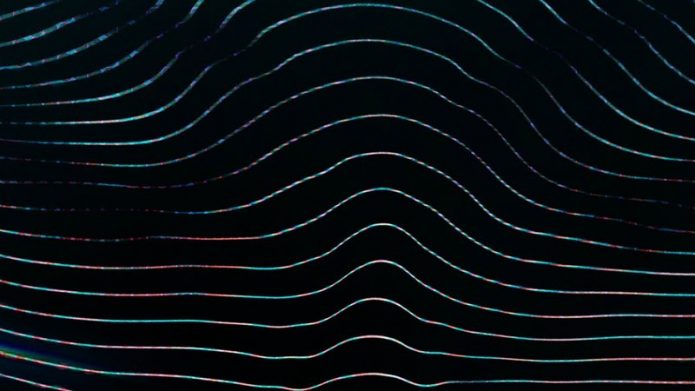 One way to think about the new Apple TV+ drama series Calls is as a podcast. Specifically, a podcast that’s a descendant of the suspenseful radio drama, only it’s played through your TV. A mix of science fiction, thriller and mystery, Calls is made up of a series of phone calls you listen to, accompanied by minimal graphics on screen: dots and names to represent people, sound waveforms to represent their voices, running captions of everything they say. The general visual feel will be familiar to anyone who watched swirling, bending curves in bright colors dance and bounce on a dark background in the age of the screensaver. There’s not a lot to it.

The mystery begins at the end — a common tactic — with a baffling and frightening occurrence, and then it doubles back to explore what exactly has happened to get us there. There are nine episodes total, each in the 15-20 minute range, and the cast is big and impressive: Aaron Taylor-Johnson, Rosario Dawson, Mark Duplass, Aubrey Plaza, Nick Jonas, and Pedro Pascal are just a few of the folks who show up. The episodes are standalone short stories that gradually reveal a larger tale. A guy on the phone with his girlfriend, a doctor on the phone with her sister, a man on the phone with a neighbor — all experiencing a baffling anomaly that disrupts their lives in different ways.

Calls comes by its unconventional format honestly — this was always an audio project. It began with a ten-minute short film with the barest visuals by writer and director Timothée Hochet, who posted it to YouTube and then wrote and directed a French television series based on it. This version is, in turn, based on the French show, and was written and directed by Fede Álvarez, who made Don’t Breathe as well and The Girl In The Spider’s Web.

What makes this an interesting effort arises out of the fact that it’s very different to write for audio drama than for television or film. There are a bunch of reasons that’s true, but one is that audiences need more and different signposting — voices that are different enough, characters calling each other by name, other cues that audio writers develop the ability to add seamlessly — to keep track of what’s going on. If you’ve ever listened to just the sound of a scene from a show or a film you’re not familiar with, you’ve probably noticed that you can lose your way very quickly, and if people are talking over each other or raising or lowering their voices, the complications can increase. (This is also why, for instance, if a news report on television plays the audio of a taped phone call, they’ll caption and label who’s talking and what they’re saying.) Audio writing is not just TV writing without the screen, and it requires tackling a different set of challenges.

This represents one way to approach some of those challenges. Even though the visuals in Calls are minimal, they’re meaningful and thoughtfully chosen. They help orient the listener so that one voice can drop in and another can drop out with a different kind of fluidity. When a person is represented by a name and a dot, connected to another name and another dot by a waveform, sometimes they’ll both stay in place on the screen. But sometimes they move, gliding closer to each other, sliding farther apart, or being joined by someone who can barely be heard in the background, whose name and dot may be fuzzy or distorted. A name might appear next to a dot only once the person on the other end of the call learns who they’re talking to.

It helps — it helps give information, certainly, but it also gives a fullness to the show that this audio alone wouldn’t quite carry. In the same way music enriches a scene on film, these visuals enrich a scene done with audio. You certainly don’t always need them to follow the action, but they complement the storytelling quite well, and they may be a helpful assist for people who don’t have a lot of practice listening to audio drama and would prefer to try it with training wheels.

Apple itself seems to be treating this as if it were a podcast — they didn’t offer any photos as part of their press materials, as they normally would with a TV show. That’s a shame, because while the audio is the focus of the production, what’s intriguing about this otherwise good-but-not-great story is that it has some of the charm and simplicity of audio-only storytelling, with some of the advantages of visual cues. There’s nothing new under the sun, and certainly some podcast dramas continue to wrestle with things radio dramas have been playing with for decades. But where there’s a proliferation of TV projects that look increasingly similar to each other sprawled across streaming services of which you could say the same, it’s appealing to see anything that’s different. And in different ways, Calls is the most familiar, and the most unusual, piece of TV I’ve seen in a while.