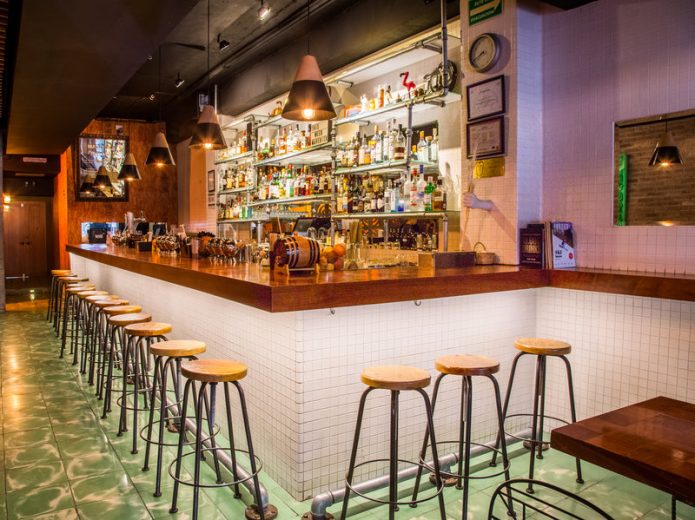 Chances are you miss your favorite bar: The chatter, the live music, or the pour of the drink made just so. You’re not alone.

With bars shuttered all over the world, that sense of community has now been absent for over a year. But one bar in Mexico decided to do so something about it, by recreating some of those sounds at your favorite bar for those confined at home. And that idea? Well, it took off around the world.

The bar is in Monterrey, Mexico. Started in 2012 by Oscar Romo and a few friends, it was a little neighborhood spot, with live music next to a long, wooden bar and a small patio outside.

Back then, Monterrey was emerging from a horrific string of violence from the drug cartels waging war across northern Mexico. The city was starting to come back to life, and people were finally feeling safe.

“It was a time for everyone to start interacting again, you know?,” Romo remembers.

So Romo and his friends gave Maverick a slogan: “Un Lugar de Encuentros,” or “A Place For Encounters.”

For the next eight years, Maverick blossomed into a cornerstone of the neighborhood, a spot where artists and musicians, writers, and others in the community could meet to unwind.

Until the pandemic hit.

“Everything was closed,” says Romo with a sigh. “We were not allowed to sell anything for two months. So the impact, it was tremendous.”

The bar was hurting. Financially, obviously, but also because that sense of community that they had worked so hard to build had evaporated overnight. Romo says it was really painful.

“I didn’t realize how important it was, you know? Those normal things that you have in life that you take for granted — and now they’re not there,” he says.

So Romo decided to do something about it, and this is where things got interesting.

Romo enlisted the help of René Cárdenas, in charge of marketing at Maverick. Cárdenas thought of the silence of the pandemic and he soon came to a realization: It was the sounds of the bar that really brought the sense of community home.

So, he decided to record each of those sounds individually.

And they put all the sounds on a website, called IMissMyBar.com. The idea was customers could put all the sounds together, and feel like they were in Maverick, while sitting around their homes, drinking their cocktails (preferably bought to-go from the bar, of course).

“But then as we were making it, we said, like, maybe this idea is bigger than us,” Cárdenas remembers.

So they modified the website to make it something where anyone, anywhere could play around and try to best recreate the bar they miss the most.

Thousands of miles away, Max Wolff, the general manager of a cozy cocktail bar called Swift in London, was going through the same feelings of loss as his counterparts in Maverick.

“I think at first it seemed to me like it was meant to be funny, but it doesn’t seem funny anymore. It seems absolutely tragic,” Wolff says.

And when Wolff heard the sounds in the web site, he was instantly drawn to it.

“There’s no other time where you’d interact with those same people that you do in a pub. You get such a cross-section of society. And that’s the fun and exciting bit,” says Wolff. “There’s no Zoom call that can replace that.”

He shared the site with his customers. London is still in total lockdown, and bars like Swift are completely empty. Wolff says the city has lost part of its spirit — and sharing the sounds created by the Maverick team was about taking some of it back.

It isn’t just those chaotic and surprising interactions that are missing. Bars all over the world are in danger of disappearing. Just in the United States, an estimated 100,000 bars and restaurants have closed during the pandemic, according to the National Restaurant Association.

Marcio Duarte is one of those struggling bar owners around the world. He runs a small bar named Machimbombo in Lisbon, Portugal.

“Business here is gone, like anywhere else right?” says Duarte. “Ninety percent of the bars here that were struggling, they will not exist after the pandemic.”

Like in many cities around the world, nightlife has been largely banned in Lisbon, though the restrictions are finally starting to lift.

Duarte’s bar has been hanging on by pivoting to selling food during the day, but it’s been tough.

So when he came across IMissMyBar.com, he put it on surround sound speakers. It gave him hope.

“It encouraged me! It’s a beautiful thing — it’s living, it’s alive that experience, and we will chase that again,” Duarte says with a smile. “I know for God’s sake, the day we open the bar the happiest person there will be me, equally with everyone.”

Oscar Romo, at Maverick in Mexico, says he’s been surprised at how the website he helped create has taken off around the world.

To him, it speaks to the importance of bars like his in the social fabric – and how IMissMyBar.com helped bring that reality home.

“What we want also is for people to realize how important are bars in our lives, really, not just from the drinking perspective, but from the social life,” Romo says. “It’s like please — don’t forget about us. Don’t forget about how a bar improves life in society.”