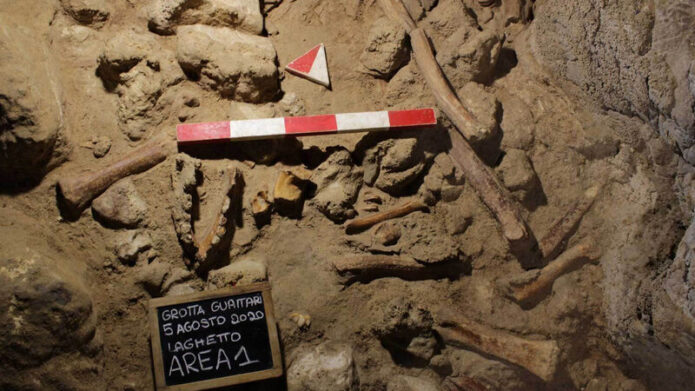 May 9, 2021Food For Thoughtarchaeology, neanderthal, rome

Archaeologists discovered the fossilized remains of nine Neanderthals at a prehistoric cave site south of Rome, the Italian Cultural Ministry announced on Saturday.

The findings include skulls, skull fragments, two teeth and other bone fragments. The fossilized bones were found at the Guattari Cave in San Felice Circeo, which is roughly 56 miles southeast of Rome.

A Neanderthal skull was discovered there in 1939, according to the Associated Press. The ministry said the latest discovery confirms Guattari Cave as “as one of the most significant places in the world for the history of Neanderthals.”

Neanderthals died out roughly 40,000 years ago, but small traces of their DNA still exist in modern humans.

The excavation work at the site started in 2019 and explored parts of the cave that hadn’t been studied before.

Italian Culture Minister Dario Franceschini called the finding “an extraordinary discovery that will be the talk of the world.”

Archaeologists said the cave, which had been closed off by an ancient earthquake or landslide, perfectly preserved the environment of 50,000 years ago.

In addition to the Neanderthal bones, the team of researchers unearthed many fossilized animal remains, including those of hyenas, elephants, rhinoceros and giant deer, among others.