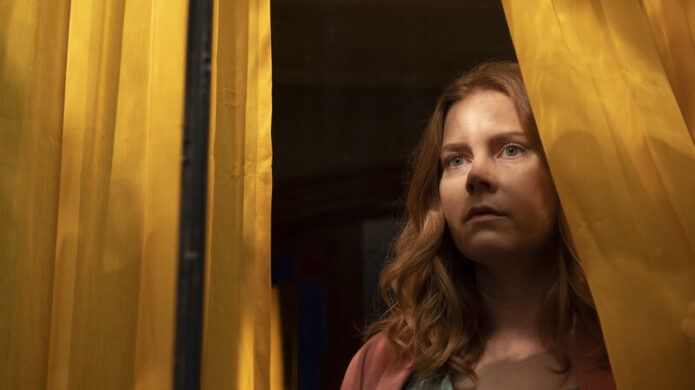 The Woman In The Window has been a little … snakebit, let’s just get that out of the way first. Filmed in 2018 (!), it was scheduled to come out in 2019 (!!), but it was pushed to 2020 for reshoots (!!!) and then to 2021 because of the pandemic (!!!!). That’s a long road. Meanwhile, the writer of the novel on which the film is based was the subject of an explosive article in The New Yorker accusing him of a variety of deceptions, and producer Scott Rudin was confronted with allegations as well, particularly about his treatment of assistants.

What’s odd is that in a lot of ways, the film, coming to Netflix on May 14, has a solid pedigree. Directed by Joe Wright (Atonement, Hanna, Darkest Hour) and starring Amy Adams, it works from a screenplay by playwright Tracy Letts. The cast includes Gary Oldman, Brian Tyree Henry, Julianne Moore, and Anthony Mackie. Furthermore, there’s something that seems perhaps timely in a film about agoraphobia coming out at the tail end of, for a lot of people, a period of rather intense isolation.

Adams plays a child psychologist named Anna Fox. She lives alone, but has phone conversations with her (ex-?)husband (Mackie) about how he and their daughter are doing. She does not go out. At all. She explains that she is agoraphobic, although it’s initially unclear how long this has been the case. She has everything delivered, and she has the help of a scruffy downstairs tenant (a charming but opaque Wyatt Russell, of Lodge 49 and more recently The Falcon and the Winter Soldier), who does his best to navigate her anxieties.

Anna becomes interested in the new neighbors across the street, and when she meets the teenage son (Fred Hechinger) and the mother (Moore), she begins to feel an attachment. But then she witnesses something from her window — she is, after all, the woman in the … well, you know — and she becomes concerned. Eventually, she also meets the family patriarch (Oldman). Before long, she’s in contact with a cop (Henry) who’s unsure what to make of her worries.

The Woman In The Window belongs to a class of domestic thrillers that blossomed with new energy after Gone Girl was published in 2012. It particularly seems to call back to The Girl On The Train, published in 2015 and made into a movie starring Emily Blunt the following year. They resemble each other not just because of their similar titles, but because they are both about women who believe they have seen something and are forced to consider whether, in fact, they have not. They are both about women whose deeply troubled lives call into question nearly everything they say. Narrators not only unreliable to the reader (or the watcher), but unreliable to themselves.

One challenge of this kind of story is that it has a limited number of places to go. Either Anna saw what she thinks she did, or she didn’t. Either she will be vindicated, or she will not. We’ve seen both of those endings before when it comes to the unreliable narrator: We’ve seen what it looks like when everyone says, “I’m so sorry I doubted you,” and we’ve seen what it looks like when reality closes in and the narrator’s unreliability turns out to have been flat-out misdirection.

Thus, as in so many genre pieces, it’s all about how you get from point A to point B. Nobody stays with a film just for a jack-in-the-box to either pop out or not. There are some strong moments — and there’s some visual inventiveness — as Anna tries to reconcile her present and her past. But without spoiling anything, I’ll say that the conclusion of this story just isn’t that inventive. It’s convoluted — reportedly, confusion is part of why reshoots happened. That’s pretty common in stories that endeavor to get to a place where they’ve tied enough knots in the thread that it’s almost impossible for anyone to say they truly anticipated where the story was going. But convoluted just requires throwing in a lot of plot detritus to conceal the truth. Inventiveness means using the formula to do something meaningfully new, and that’s where this film falls short.

They might get away with the familiar plot if there were a little more dimension to these characters. This is particularly true of Anna herself, whose fear and paranoia seem … well, like well-trod cinematic territory of fear and paranoia. The most intriguing character is the one played by Julianne Moore, whose laugh is unsettling and whose friendliness is ominous, but her appearance is regrettably brief. Oldman is playing a well-worn type, as is Hechinger. There’s a good scene late in the film between Adams and the wildly charismatic Brian Tyree Henry, and if there had been a way to make the film more of a two-hander between them as she tries to convince him to believe her, it might have felt like a stronger story.

As it is, you get a good cast working with a good director and screenwriter on a story that just doesn’t have enough to offer.