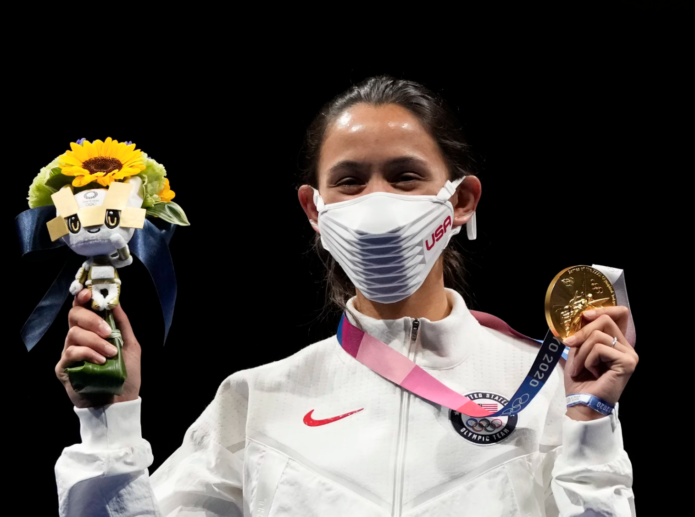 TOKYO — If you’ve been tuning in to Olympic events, you might have noticed that every medal winner carries a small bouquet of yellow, green and deep-blue flowers tied with a blue bow.

But they’re more than just flowers. The elements of the bouquet carry a deeper story, and they are years in the making.

They’re meant to symbolize Japan rising from the devastating earthquake and tsunami in 2011, which left about 20,000 people dead or missing. Homes were swept away and whole areas were deserted.

The flowers that make up the bouquets are grown mostly in three prefectures hit particularly hard in that event. All but about 100 of the dead or missing were from these areas.

The bouquets’ Eustomas, which are green and frilly, are grown in Fukushima. After the tsunami killed thousands, the area was devastated by a nuclear disaster, forcing many residents to evacuate.

It was an unlikely place to grow flowers. The Japanese organizers say a nonprofit started trying to cultivate Eustomas there in an attempt to jump-start the economy and help with the recovery effort.

Switching to flowers was also a practical option for some agricultural producers. Early tests of vegetables grown after the nuclear disaster showed their radiation levels were too high for human consumption, Kyodo News reported. Flowers are held to less strict standards.

In the years since the disaster, Eustomas have flourished in Fukushima.

“I hope there is a chance to introduce to the world how much Fukushima has recovered through the flowers,” Yukari Shimizu, who grows flowers in a town that was formerly off-limits because of the radiation, told Kyodo.

When the tsunami hit, it propelled gigantic waves to Miyagi prefecture, and more than 10,000 people there were killed or are missing.

Olympic organizers say that in the wake of the disaster, parents came back to a hillside in Miyagi to plant sunflowers in memory of their children who died.

“Every year the hill becomes covered with sunflowers,” the organizers said. “The sunflowers from Miyagi reflect the memories of the people who were affected by the disaster.”

Miyagi is known for its roses, and sunflowers are a newer specialty for the area. Flower cultivators needed to develop the expertise and technology to produce small sunflowers that would fit within the small bouquets.

Just north of Miyagi is Iwate, a coastal area that was also devastated by giant waves. The prefecture produces the majority of Japan’s gentians, a small bright-blue flower. Unlike Miyagi and Fukushima, which tackled growing new species of flowers, Iwate has been growing gentians since at least the 1960s.

The bouquets also feature a small figure of the Olympic mascot, Miraitowa. The cartoon creature has a blue and white checkered headband, and its name is a combination of the Japanese words mirai (future) and towa (eternity). It is meant to be a celebration of Japan’s past and future.