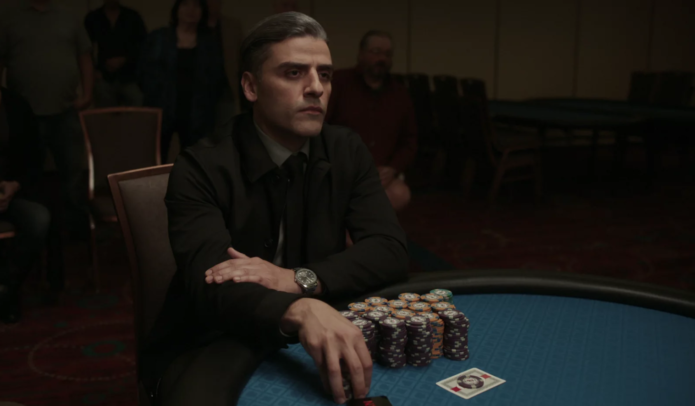 The signature Paul Schrader image is of a lonely middle-aged man nursing a glass of booze and writing in his diary, pouring out all his dark thoughts and guilty secrets. In the 1992 film Light Sleeper, it was a drug dealer having a midlife crisis. In the more recent First Reformed, it was a minister radicalized by the threat of climate change.

Schrader likes to burrow deep inside these men and their tortured souls, but there’s an amusing randomness to the way he assigns his characters their respective issues. His absorbing new picture, The Card Counter, is no exception: It stars Oscar Isaac as a professional gambler who used to be a military man stationed at Abu Ghraib.

We don’t know all this right at the start. Isaac’s character goes by William Tell, a silly gambler’s pseudonym. When we first meet William, he explains that he spent years in prison for some unspecified crime. It was behind bars that William learned how to count cards. Now he spends his days hopping from casino to casino, playing blackjack and poker and doing just well enough to beat the house without cleaning it out. At night he returns to his motel room, writes in his diary and tries to keep his demons at bay.

Early on, William meets a gambling agent named La Linda, played by a delightful Tiffany Haddish, who wants him to join the big leagues. Haddish and Isaac have a sly chemistry that goes from flirtatious to sizzling in no time, even though William initially rebuffs La Linda’s professional overtures.

Eventually Schrader brings William’s past to light, through a series of encounters that seem contrived at first but gradually bring the story’s central conflict into focus. At a casino one night, William spies Maj. John Gordo, played by Willem Dafoe. Gordo was his former superior years ago at Abu Ghraib and taught him everything he knows about torturing and interrogating suspects. But while William was later court-martialed and went to prison, Gordo got away scot-free and now works as a private security contractor.

That same night, William meets a college dropout named Cirk, played by Tye Sheridan, whose dad was also trained by Gordo; he was dishonorably discharged and eventually killed himself. Now Cirk wants revenge against Gordo and asks William to help him.

Schrader drops in a few harrowing flashbacks to Abu Ghraib, tearing a hole in the movie’s calm, steady surface. We see prisoners being abused and interrogated in images filmed with a heavily distorting wide-angle lens — a visual abomination as well as a moral one. It’s likely no coincidence that The Card Counter is being released so close to the 20th anniversary of the Sept. 11 terrorist attacks. Schrader can be bluntly didactic when it suits him, but here he’s sincerely inviting the audience to reflect on the legacy of Sept. 11, including the crimes that Americans have committed in the name of justice.

William, who’s trying to distance himself from his past, wants no part of Cirk’s plan and tries to dissuade him from following through. He takes the kid under his wing, letting him tag along on his casino tour. He also takes La Linda up on her invitation to join her stable, hoping to make enough on the poker circuit to help Cirk out financially and get him back in school. But that’s easier said than done. As in so many of Schrader’s films, dating back even to his script for Martin Scorsese’s Taxi Driver, a violent end seems inevitable, no matter how much our hero tries to avoid it.

This is a superb role for Isaac, who brings his usual sly, soulful magnetism to the role of a man who plots every move with suave precision. William is always crisply dressed in a shirt, tie and leather jacket. When he moves into a new motel room, he covers every piece of furniture with plain white sheets, as if he were trying to impose extreme order on the extreme disorder of his past. But in Isaac’s dark, haunted gaze we see a history of trauma that can’t be purged so easily. Once young Cirk enters the picture, William sees a chance to make further amends for his sins and do some good in the world.

That world seems awfully drab in The Card Counter, a nondescript suburban wasteland that time seems to have forgotten. The America that William gave so much of his life to serve doesn’t look so beautiful. But there’s one exception, when La Linda takes William out one night to visit the illuminated Missouri Botanical Garden, flooding the screen with vibrant colors that accentuate the actors’ dazzling rapport. As grim as things can get in Schrader’s movies, he’s also a romantic at heart, someone who sees in love the possibility of both risk and redemption.