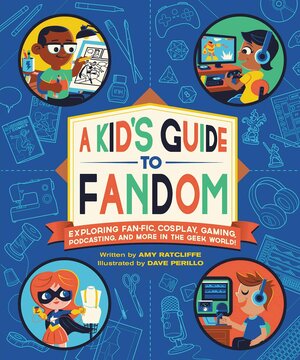 May 11, 2021Food For Thoughtfandom, highschool

The first thing Kristen Lopez remembers being a fan of is Disney, specifically the Pirates of the Caribbean movies.

“I remember celebrating my birthday … and we all went and saw it, full disclosure, I saw Pirates of the Caribbean16 times in theaters to the point that I could memorize swaths of this movie,” she says. “I look back on it now and I was like, ‘god we were nerds,’ but there was a lot of fun to it … it was a feeling of understanding and camaraderie with my friends, they definitely understood and didn’t look down on me.”

Growing up disabled, Lopez says places like Disneyland gave her “the sense of possibility and no barriers.” Other fandoms — like Turner Classic Movies — came later; Lopez says that becoming part of the supportive TCM fandom felt “like the best parts of high school, where you feel that acceptance and people like what you like, and you don’t really have to explain or justify it.”

It’s about teaching kids that there are … many other people who like the same things that they do in the same enthusiastic ways and hopefully, helping kids feel more comfortable and confident.

But fandom has a darker side as well. When Lopez wrote about the portrayal of chronic pain in 2018’s Ant-Man and the Wasp, she got several days of vitriol online, including rape threats.

“There’s the people that love to troll and that love to stir the pot, but then there’s also the people that feel very defensive about the fandom communities that they love, and feel that any criticism is a criticism of them,” she says. “I get very nervous when I’m talking about genre things that I know have a very deep fandom, and it’s like, ‘great they’re going to be mad at me … talking about this.’ … That happens a lot professionally.”

So how do fans navigate these communities, to find the good parts while being aware of the bad?

Amy Ratcliffe, managing editor for the pop culture site Nerdist, addresses this as part of her new book, A Kid’s Guide to Fandom. She says it’s the book that she wishes she could have had when she was a young fan looking for others like her. Ratcliffe remembers growing up as a fan of the Wheel of Time series, using her family’s dial-up internet to visit online forums.

She says her objective is for kids to be aware of fandom, “that other people like the same things that you like … even if it’s one other person, like you’re not alone.”

“I still hear stories about young girls being bullied because they like Star Wars; they think they’re the only kid,” she says. “It’s about teaching kids that there are … many other people who like the same things that they do in the same enthusiastic ways and hopefully, helping kids feel more comfortable and confident.”

No one gets to decide who is a “real” fan

Ratcliffe explains in her book that some fans can become gatekeepers, people who want to decide who is or is not a “real fan.” Fans, she says, should never have to prove themselves.

Ratcliffe herself has run into gatekeepers; once, at a Star Wars convention, a man saw her Rebel Alliance tattoo, “looked at the tattoo, looked at my then-boyfriend who was with me, and was like … completely serious by the way, no sarcasm, like, ‘oh that was really nice of you to get that tattoo for your boyfriend.'”

Her advice for younger fans who want to find communities is to start with groups or places that they know: a local library, or a game shop they go to with their family; to trust their instincts when they feel something is off; and to get an older sibling, a parent, or guardian involved.

Mackenzie MacDade has thought a lot about this too, as someone who is deeply engaged with fandom and is a diversity and inclusion consultant for, among other things, Buffering the Vampire Slayer, a podcast about Buffy the Vampire Slayer; and Noelle Stevenson, creator of the Netflix show She-Ra and the Princesses of Power.

“The first thing I start with, whether kids or adult, is: Do not passively consume media,” she says. She explains that means people should think critically about what is portrayed, be aware of problems either in the fictional world or how creators and stars behave, and then decide to enjoy the work anyway if that is what they want.

As an example, she brings up the relationship between Rey and Kylo Ren in the most recent Star Wars movies — a favorite topic for fan fiction writers.

“If we look at how Kylo and Rey interact, is that a way that you would actually want to interact with someone and then date them? Would you feel comfortable and safe doing that? No? Great. You understand, then feel free to read the fic anyway if that’s what you want to do.”

“Don’t watch it and just think, ‘oh, this is just entertainment’, because popular culture shapes our culture whether we want to admit that or not,” she says. “Now, we kind of do shape popular culture, but for the most part, the messages that we get from popular culture are internalized and often played out.”

What are the creators doing?

MacDade adds fans can also look to the creators, or people involved in a movie or TV show or book series, to get a sense of how they interact with fans.

“What the best creators do: they create a sandbox, they build a couple of castles and they let it go, and they let people play and have fun,” she says. “That’s how you find the best fandoms, I think, you look at what is the creator doing, how do they feel about it.”

She cites the example of Rick Riordan, creator of the Percy Jackson book series, who promotes fan creations, and extended the his fictional universe by working with authors from different backgrounds to write about the gods in their cultures.

Tracy Deonn, author and creator of the Legendborn fantasy book series, thought specifically about future fans while writing her book. She says there are moments that she chose not to write because it might be something that people might enjoy writing as fan fiction.

That feels like something really personal and empowering … when someone claims for themselves that they’re a fan of something.

“It’s sort of my love letter, my thank you back to the fandom community, creating the little pockets … fans will often find the crack in a story, and I like to say they get in like water and expand like ice,” she says.

“That organic growth is why people stick around,” she says.

Fandom is an identity you choose for yourself

Deonn’s advice to fans is to find the people who enjoy something in the same way they do, to know there are probably other people like that out there, and to remember that their relationship to a work is special.

“I think about how many different identities are applied to individuals from external sources … I’m walking down the street, I’m minding my own business, someone else externally refers to me as a Black woman, and then that comes with a whole lot of historical, social, cultural weight depending on who that person is and what they’re looking at,” she says. “Fandom is something that is pure choice: no one can really call you a fan of something just based on an external visual. Even if I’m walking down the street wearing a Leia costume, someone could call me that but they don’t fully understand my engagement with the story. That feels like something really personal and empowering …when someone claims for themselves that they’re a fan of something.”

Alan Yu reports on science for WHYY in Philadelphia.