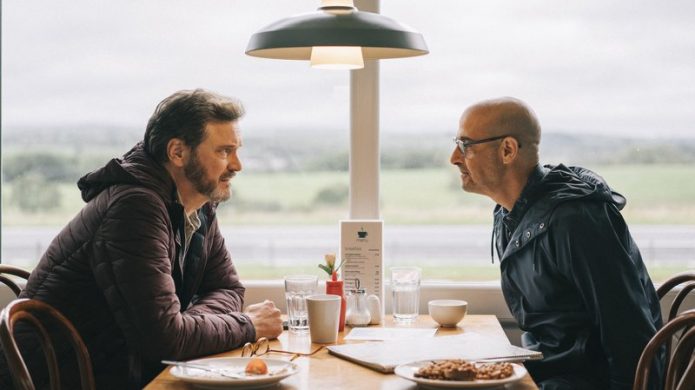 As you watch Supernova — writer/director Harry Macqueen’s light-on-dialogue, heavy-on-emotion tale of a gay couple coming to terms with the fact that one of them is experiencing early-onset dementia — you keep getting struck by the amount of trust the film places in its two leads.

Which makes sense, considering that the two leads in question are Colin Firth, as British concert pianist Sam, and Stanley Tucci, as American novelist Tusker. The latter is the one who is losing himself, and who seems, of the two of them, much more sanguine about it.

In an early, wordless scene, Tusker wanders away from the RV in which the two are touring the British Lake District. A worried Sam drives along a narrow country lane until he spots Tusker; as he gets out to retrieve him, Macqueen’s camera stays in the RV, looking out at the two of them through the windshield. Sam approaches Tusker, and reassures a concerned motorist that everything’s fine. (Everything is not fine). Tusker sees Sam and breaks down; they embrace.

A lesser film would place us up with them, in the middle of that embrace, amid the tears and relief and whispered assurances. But Macqueen — an actor himself, and a good one, a fact which seems not inconsequential here — knows we don’t need it. Tucci and Firth can sell that moment, in all its panicked intimacy, just through the set of their shoulders and the way their bodies slump into one another.

Supernova is marked by that kind of knowing restraint, that delineates the difference between sentiment (true, earned emotion) and sentimentality (the cheap, manipulative attempt to tug at our heartstrings). In scene after scene, as the two men visit friends and family one last time, we glimpse the showier, more maudlin film that Supernova could but never does devolve into, hovering just at the edges. Only in its closing moments, which are predicated by a dramatic conflict of the sort that stories like this one require, does the movie become the “here’s one for the Oscar reel” actorly showcase it’s always threatened to be, but the track has been carefully laid, and its hard to begrudge these two actors the chance to dig in.

As Sam, Firth is at once soulful and circumspect, having buried his fears about his impending loss and his worries that he will not be up to the demands of caregiving, so as not to worry his partner. We’ve seen Firth do the British stiff-upper-lip thing countless times, and it’s good to see him in a role that allows that lip to quiver a bit.

Tucci’s role is more demanding, in that it so readily invites big, actorly choices to register his condition. But he cannily underplays Tusker as a man gifted with the emotional intelligence to disguise the true extent of his dementia, at least for now. When he struggles for the right word, it’s never overt — Tucci passes it off like a momentary glitch, nothing to worry about.

That Supernova is centered on the lives of two 60-year-old gay men is notable for a couple reasons. One, sheer novelty: Stories about gay men of a certain age dealing with non-AIDS-related mortality remain relatively rare. Two, had the couple at the heart of the story been a heterosexual one, the central tension — can one partner care for another? — would have been weighed down with hoary notions about traditional gender roles. Focusing on a same-sex couple means preconceived, abstract notions about masculinity and femininity can be dispensed with, so we can focus instead on the shifting power dynamics between these two specific individuals.

Firth and Tucci are longtime friends in real life, and they were originally slotted into the opposite role to the one they ended up playing in the film. Once you’ve seen Supernova, that fact will be hard to wrap your head around, as the actors seem so well-suited to their respective characters. They likely would have proven just as capable at capturing the intimacy that Sam and Tusker share, but it’s hard to imagine that they’d have found the small, individual grace notes they do here — wordless moments that express both an understated delight in what they have, and the devastating knowledge that it will soon be gone forever.